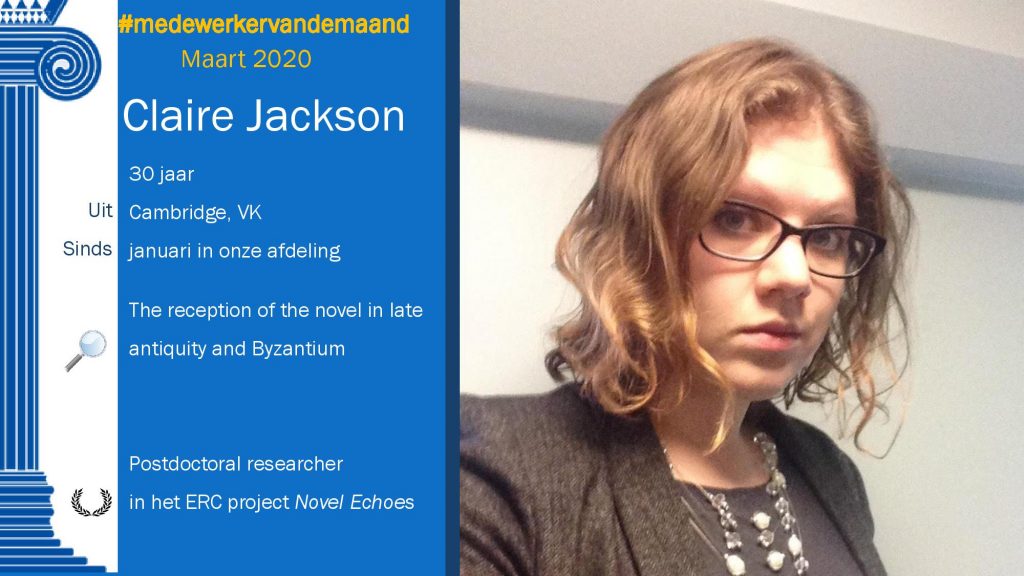 Hi Claire! You just started a postdoctoral fellowship in our Section as part of Professor Koen De Temmerman’s Novel Echoes project. Welcome to Ghent! How are you finding Belgium and the UGent?

Thank you! I’m really delighted to be here – it’s a wonderful city and a fantastic university. I’ve been enjoying getting to know the city– I’ve spent quite a bit of time in Brussels because my brother has been living there for the last five years or so, but I didn’t know Ghent at all before I arrived. I like the city’s mixture of medieval and modern, and I’m really enjoying the sense of community here at UGent – I’m particularly grateful to all my colleagues who’ve helped me with my (very basic) Dutch and shown me the important things in life like where the best frituren are!

I’m looking forward to exploring the music scene in Belgium as well – I must confess that in recent years I’ve dropped the piano more in favour of bass guitar…but I’m sure it’ll all come back to me!

Your research so far has focused on concepts of fiction in the ancient novel. What is your plan for your three-year post in the Novel Echoes project?

My previous research has looked primarily at how ancient novelists conceptualise fiction in their works – in other words, I’ve been less interested in external theoretical models of fiction which might have shaped the ancient novel and more curious about how the novels explore ideas about fiction from within. I’m now looking at how these self-presentations of fiction impact the novel’s early reception history. There’s a real gulf between how novels are explicitly referred to in later texts and their wider unspoken influence, and what I’m researching is how we bridge that gap between the theory and the practice.

The early testimonia to the ancient novel which are often quite limited, even critical, in how they refer to the novels – for example, you have the late fourth/early-fifth century physician Theodorus Priscianus prescribing reading novels as a cure for impotence! – but then you see lots of texts, both religious and secular, make use of novelistic themes, motifs, and language in places you wouldn’t expect such erotic texts. What I’m researching at the moment is how the ninth-century patriarch Photius describes novelistic fiction in his Bibliotheca, building on some articles I’ve written about the fragmentary novelists Antonius Diogenes and Iamblichus, and from there I want to use this as a jumping-off point to explore novelistic fiction in tenth-century texts. What I’m hoping to do overall is to tease out the early reception history of the novel in a way that’s never really been done before and to develop a methodology which allows us to bring together these patchy testimonia and thematic intertextual references in a more holistic way.

You previously studied and worked at Cambridge. Can you tell us a little about your academic experience in the UK?

I stayed at Cambridge for a very long time, looking back at it… I did my Masters and PhD degrees at King’s College, and then I joined Sidney Sussex College in 2017 as a Language Teaching Associate and Director of Studies, which was conceptually a big move but in practice was only five minutes down the road! I got to work with some wonderful people during my PhD (I was supervised by Simon Goldhill and Richard Hunter, and Tim Whitmarsh was one of my examiners) and I really enjoyed the combination of teaching and research that I was able to do throughout my time there. For example, I worked alongside the Greek Imperial Epic project which ran from 2013-2017 for some time, and I organized a number of conferences in Cambridge on Heliodorus’ Aithiopika, epistolary fiction, and failure in classical literature (!). My post-PhD job involved a lot of language teaching in both Greek and Latin and I was also an academic tutor for the Classics students at my college, so I spent a lot of time interacting with students. It was hard to leave them, as I loved working with them and seeing them grow, but it’s been so nice to stay in touch and hear how they’re getting on.

What I’m hoping to do overall is to tease out the early reception history of the novel in a way that’s never really been done before and to develop a methodology which allows us to bring together patchy testimonia and thematic intertextual references in a more holistic way.

Is there anything you’re particularly looking forward to exploring in Belgium in the next few years? And are you going to play the piano for us at some point?

I definitely want to continue exploring Flanders – I’ve really fallen in love with the landscape here and I’m very much looking forward to getting to know the whole area better. I’m also very eager to learn Dutch properly – I’m really enjoying the little bits and pieces I’m picking up, and I’m excited to formally study it soon. I’m looking forward to exploring the music scene in Belgium as well – I must confess that in recent years I’ve dropped the piano more in favour of bass guitar…but I’m sure it’ll all come back to me!

Good luck with your work, and with the bass!