We’re delighted to introduce oOur staff member of the month, Ellen Söderblom Saarela. She arrived in Ghent from Sweden just before the covid lockdown, but has already made her impact felt in the Novel Echoes research group. We asked her about the conference she just organized, her experience living in Belgium, and on learning Dutch. 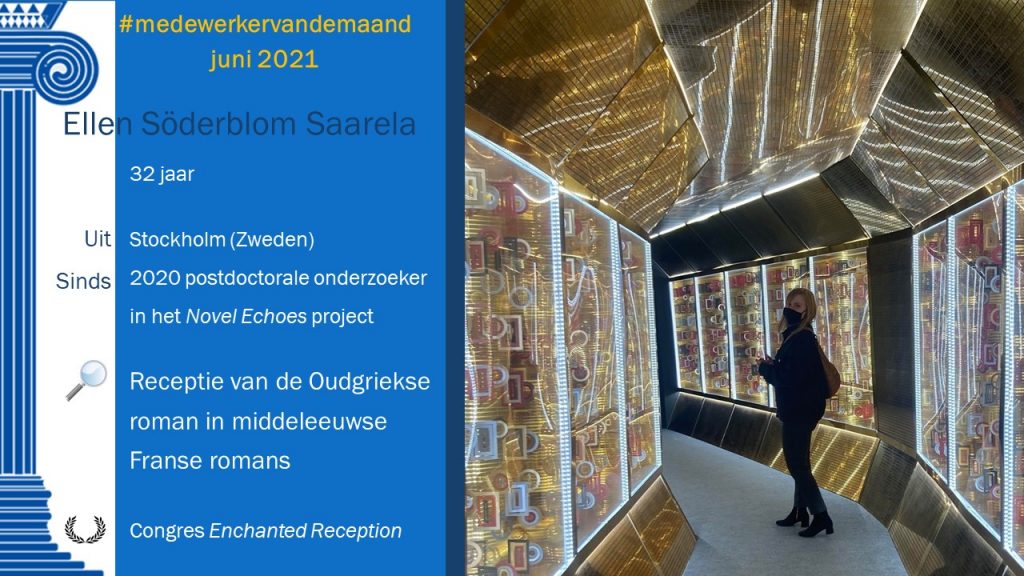 Hi Ellen, you’re one of the postdoctoral researchers in the Novel Echoes ERC project, coordinated by Professor Koen De Temmerman. For those people who don’t know the project, could you give us a little bit of information about it, and explain your role in the project? What is the focus of your research?

Overall, the Novel Echoes project investigates the receptions of ancient novels in late antique and medieval literature. My focus is on novelistic influences on western vernacular romances in the Middle Ages. I focus on Old French romances from the twelfth century: I examine how the ancient novel works as a potential influence on these texts, along with other ancient and medieval influences. What I find particularly fascinating is how love is narrated, if reciprocity is represented, and if so, how this reciprocity could be understood from an intertextual perspective.

I study the Old French romance in relation to the Byzantine novel from the same century. In the West and in Byzantium, both men and women took part in the literary audiences where the novels and romances were read. Can we see this represented in the texts themselves? Whose perspective is told? How can a female voice, and representations of female subjectivity, be traced in premodern literature? What do the medieval texts do with the ancient tradition to which they respond in their own narratives? These are some questions I study in my research.

You started working at UGent about a year ago. Any highlights or – dare I say it – regrets?

I have to say, it has been a strange year! But this is not due to UGent, but the pandemic and lockdowns, of course. But aren’t we all tired of dwelling on this? I know I am! (Although, I must say that now, as things slowly open up again, I realize in a new way what an incredibly strange time we’ve all been living through? Oh, how I need people, and to socialize, in my life!)

I had no experience of Belgium before coming to Ghent for my job interview in 2019, so, during this time I’ve come to know a, to me, new place. Having pretty much stayed put throughout the Covid age, I’ve had the occasion to see many parts of the country, and cities. In all its worrisome strangeness which marks this period, it’s been quite lovely to travel locally. Coming from a country with much bigger distances between cities, I’ve been amazed at how nature shifts dramatically from one region to the other, without having to travel that far. As far as UGent is concerned, I’ve had nothing but good experiences; everyone has been very helpful, not least the library, which of course has made all the difference. Throughout the times of social distancing and lockdowns, the project colleagues have kept contact regularly through informal meetings, reading groups,  and walks outside when it was allowed.

How can a female voice, and representations of female subjectivity, be traced in premodern literature? What do the medieval texts do with the ancient tradition to which they respond in their own narratives? These are some questions I study in my research.

You co-organized your first project conference this month with Tine Scheijnen on Enchanted Reception. How did you find the online format?

As we organized the conference, we hoped for a long time that perhaps we could have it in person, or at least in a hybrid version, with participation either in person or online. However, as the situation developed we realized that this wouldn’t be possible, and so we coordinated the conference completely online. I wish we could have met in person and discuss papers in a physical room, as I really miss this part of the academic work. Yet, it did work out well anyway: we had a meeting with the participants a few days before the conference, in which we got introduced to one another; we also wanted to have plenty of space in the programme to encourage discussions, which I believe made it easier to interact in the online format.

Adding to that, we had a virtual reception in an informal, Troy themed space (since the conference was about medieval receptions of Troy narratives…), which gave speakers and listeners a chance to interact beyond the scheduled discussions in the programme. I feel that, at the end of the day, the online format worked out really well for our conference; there were many engaging discussions and a friendly environment. It was also nice to bring people together who are based all over the world: with speakers from different parts of the US, Chile, and different European countries, and with listeners from all over the world as well. Although I would have loved to meet everyone in person, of course, I feel tremendously happy about how the conference turned out.

And finally, because we’re all in need of some positive perspective… What are your summer plans?

I’m currently exploring the country side of the Ghent region, biking alongside the fields, cows, sheep, and horses. It’s lovely. Other than that, I’m longing for my mother to come visit me this summer, and later on take a road trip to see my father who lives in Seskarö, a Swedish island up north, not far from the Finnish border. Later, I can’t wait to learn Dutch as soon as classes are given at campus again in the fall! It would be lovely to be able to read a novel in Dutch….