The staff member of the month of June is Mara Nicosia, who started working for Koen De Temmerman’s ERC-project Novel Echoes as a postdoctoral researcher just over a year ago, and is already making her mark! Evelien Bracke caught up with Mara, to ask her about Syriac studies, working in Ghent, and… visiting Sicily! 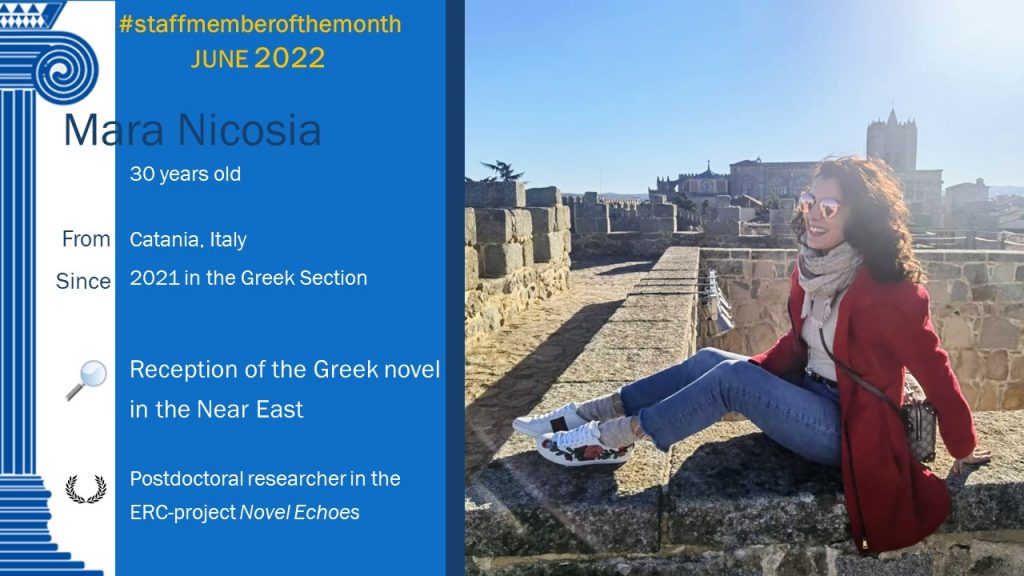 Hi Mara, how lovely to speak to you! You’ve been doing some great work on Syriac studies for Koen De Temmerman’s ERC-project Novel Echoes. Can you tell us a little about the work you’re doing?

Yes, of course! As a postdoctoral researcher, I am studying the reception of Greek novels in the Near East, with a specific focus on the Syriac world. Syriac is a variety of Late Aramaic (second-thirteenth centuries CE) that has left an imposing body of literature, together with a huge number of translations from Greek. Surprisingly, though, there seems to be no full Syriac translation of Greek novels, but only two short excerpts from Heliodorus’ Aethiopika in a ninth-century rhetorical treatise. The focus of my research for the past years has been the Syriac rhetorical tradition, so I’m studying these excerpts in the framework of this tradition and its circulation in Syriac schools. Together with my colleague Simon Ford, I have been studying also the Syriac version of another Greek novelistic piece, Pseudo-Nilus’ Narrations, which has been super interesting. I got to study the Semitic toponyms hosted in the Greek and Syriac texts, trying to pin them to a modern location. It has been a lot of fun!

You’re from Sicily! How are you finding living in Ghent – and learning Dutch?

All my life I’ve been living in big or chaotic cities, such as Catania, Naples, Paris, Madrid… Ghent is a most welcome change! I am madly in love with Ghent, it is one of the most charming places I’ve ever been to! In all honesty, I love my Belgian life and I find myself to be enthusiastic about the city, the job and the colleagues!

Learning Dutch has been a pleasant experience for me. I thought it would be a waste of an opportunity living here without trying to learn it, so I managed to get through two levels so far. I am very passionate about languages and I cannot resist the challenge of learning new ones! The only unpleasant note in my Belgian life is that I am systematically experiencing problems with my post: my letters and my parcels always vanish or are lost! This has actually turned into a bit of a joke in the office because I’m always so frustrated at couriers and shipping companies but, despite my many complaints, nothing has changed so far.

I got to study the Semitic toponyms hosted in the Greek and Syriac texts,

trying to pin them to a modern location. It has been a lot of fun!

A little bird tells us you’re getting married soon. How is it combining wedding preparation with research?

Well, I have been more relaxed in my life! Living here and trying to be on top of the preparations in Sicily is exhausting, but ultimately very rewarding. The most stressful part has been respecting all the deadlines I had in May and June, in terms of papers that needed to be submitted, conference presentations and various other engagements. But I’m quite proud of how I managed to prevent myself from panicking too much (so far…). Bottom line: I am very excited about the wedding, so I’m compulsively repeating to myself not to spoil it with unnecessary stress.

One week after the wedding I’ll fly to Paris to attend what I call “the Syriac Olympics”, which is a huge international conference, called Symposium Syriacum, that takes place around the world every four years. This year, I am co-organizing a panel (together with Riccardo Contini) on Syriac lexicography and lexicology, as part of which I’m giving a paper as well. The whole organization has been quite stressful, as the conference was originally supposed to take place in July 2020, but I look forward to it!

Wow, that sounds really exciting! Great to get back to live conferences! What’s the most exciting piece of research you’ve been working on, or are working towards?

Since the beginning of my PhD, I’ve always worked on the acquisition of loanwords from Greek into Aramaic varieties and Arabic, particularly – but not exclusively – in the field of the technical vocabulary of rhetoric. Recently, I’ve moved to the study of the Syriac rhetorical tradition and its “classics”, which has been a big leap. I ventured into a completely new – and severely understudied – line of research, which I find super cool. The idea is to be able to map which texts were used and transmitted in the Syriac rhetorical tradition as examples or progymnasmata, and ultimately which were the authors and works that shaped the Syriac rhetorical tradition, which is imbued with Greco-Roman models but does not seem to be based on Aristotle, and at the same time is very original in themes and organization of the matters.

In all honesty, I love my Belgian life and I find myself to be enthusiastic about the city, the job and the colleagues!

And finally, any recommendations for anyone wanting to travel to Sicily? What are your favourite places?

Sicily is a lovely place to travel to, but my first recommendation would be not to visit it in late July or August because it is too hot and too crowded. Catania is a place worth visiting, as are Palermo, Ortigia, Trapani and others. In my opinion, the best idea is to tour by car around the island and see as many places as one can. Food is definitely worth trying, and we have such a rich Greek and Roman heritage, as well as Phoenician, Arab, and much more, that it is simply impossible to get bored. I’d be happy to help anyone who wants to organize a visit and provide them with useful tips!

I feel a trip coming up for our research group… Thanks, Mara – enjoy the wedding!